More than two million Syrians have fled their country's civil war, now stepping into in its forth year since Syrians rose up, seeking shelter in neighbouring countries such as Jordan, Lebanon, Turkey and Iraq.
At least half of the refugees living over Syrian border - 1.1 million - are children. Lots of them trapped between work or school, as they become a cheap labour. Many are fast becoming primary providers for their families as their parents can't find jobs in exile. They work long hours of manual labour in fields, farms and shops for little pay, according to a U.N. report. Their little hands are useful in mechanic shops or restaurants where kids usually find work. Others are send to the street to resell different little product, clean shoes or simply bag for money. The war created to called “lost generation” of Syrian children, who before the war almost universally attended elementary school. Now fewer than half are in school; among refugees in Lebanon, the figure is 12 percent. 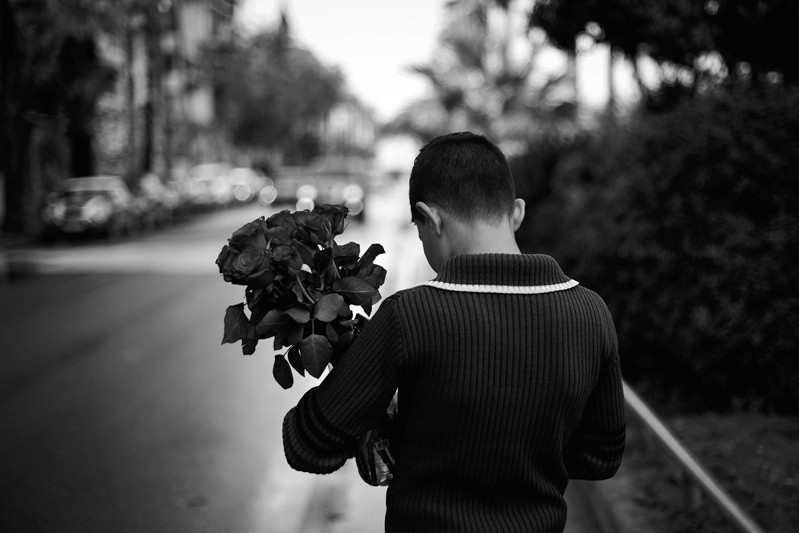 Alaa, 12, Syrian refugee from Idlib, sells the flowers on March 13, 2014, in the street in Beirut, Lebanon as he hides his face. From what he makes about 10 dollars a day and give the money to his mom. "Of course i would love to go back home. Back there i was going to school and I had a good life," he says. 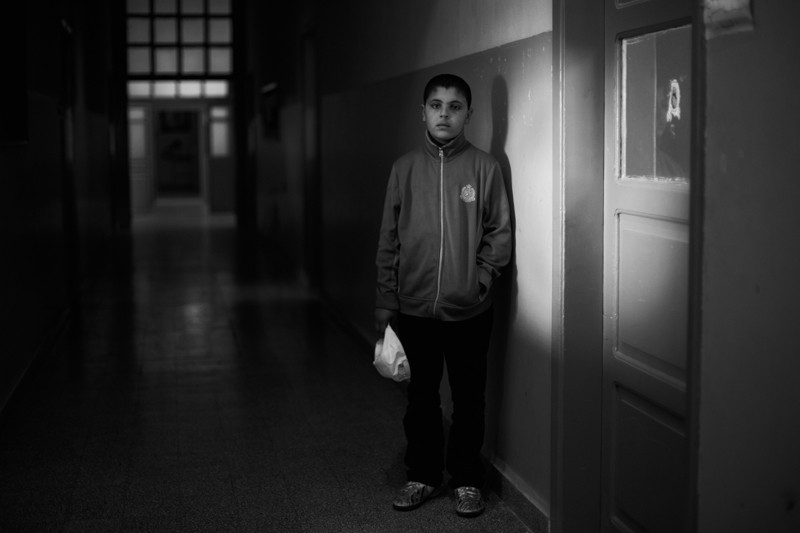 Bilal Ali Shalloum, 11, Syrian refugee from Hama, is seen in a school hall in Broumana Mixed Intermediate Public School in Mount Lebanon region, Lebanon, on March 18th. When he first came to Lebanon, his family had nothing, so he had to work, to help provide for the family. He worked at a restaurant and later on in a supermarket before he started going to school. In the restaurant where he cleaned, his shift sometimes lasted from 9am till 1am. He's been in Lebanon for 1 year. 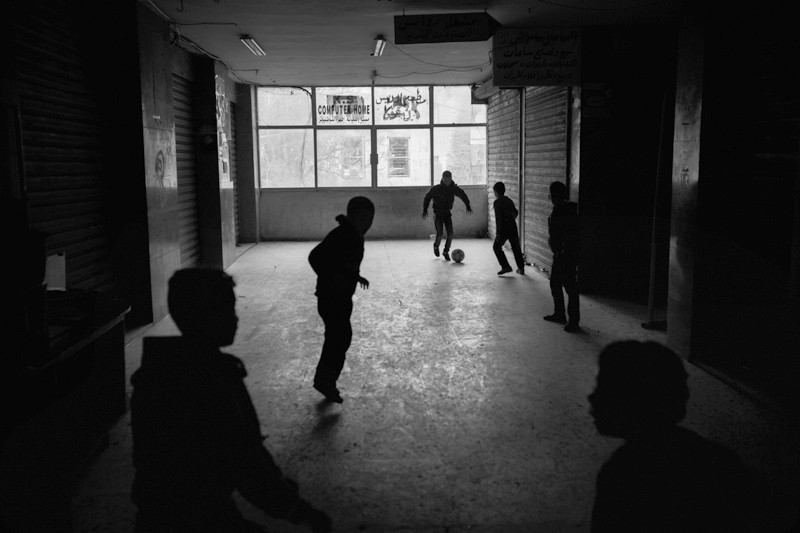 Children, Syrian refugees, play football in a building next to the stores where they work and live, in Saida, Lebanon, on March 14th 2014. 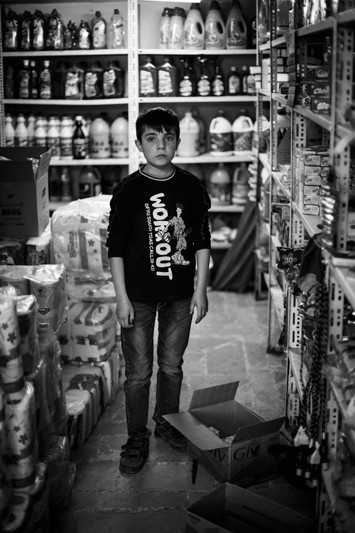 Mustafa, 13 years old, Syrian Refugee from Aleppo, works at the supermarket in Aley, city in Mount Lebanon. He works everyday - from 8am to 8pm - fill the shelves, and help in the store to support the family with the budget. In Syria he went to school. He doesn't like the school in Lebanon but checks at night what his sister is studying. 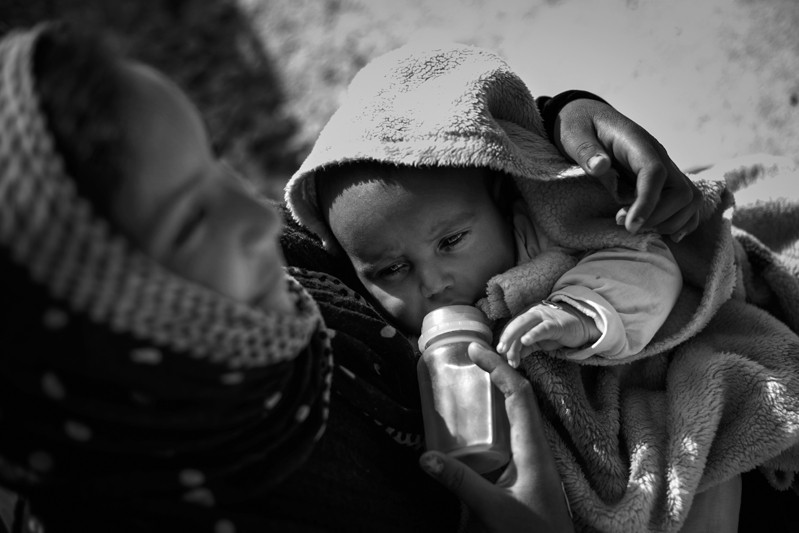 A Syrian refugee girl feeds her baby sister in a refugee camp in Dalhamiah, Zahle in Lebanon, on March 20th 2014. 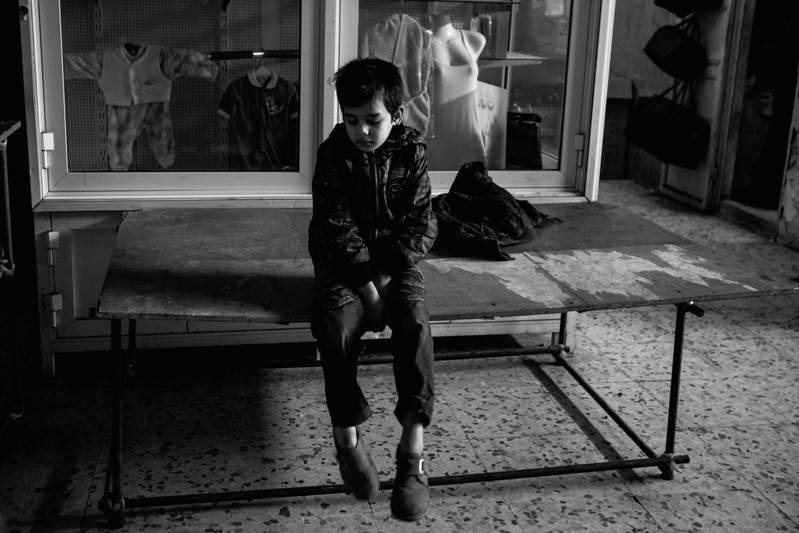 Azad, sits on the table on March 14, 2014, inside the shops/complex building, in Saida, Lebanon. Azad Lives with his parents in the building where he works – he cleans the shops, helps etc. He says he doesn't know his age. He works several times a week. 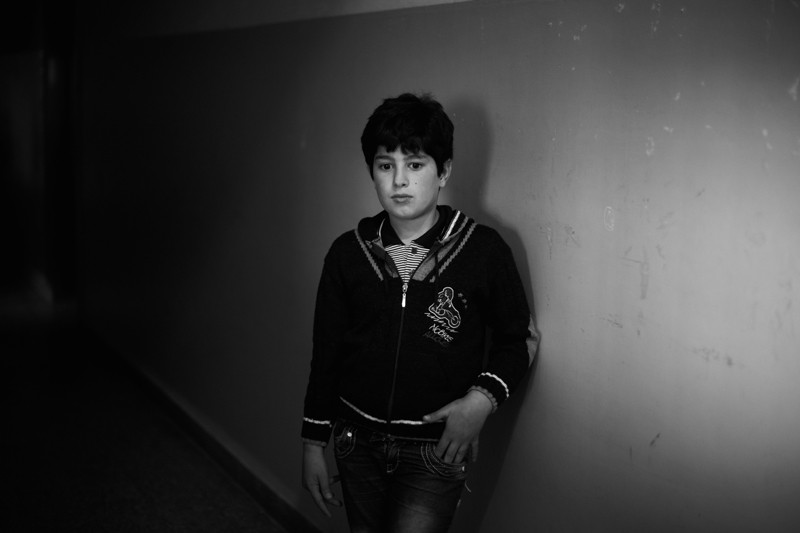 Youssef Sheik, 12 yr old, Syrian refugee, stands in a school hall in Broumana Mixed Intermediate Public School in Mount Lebanon region, Lebanon, on March 18th. His father decided to leave Syria because it was too dangerous four months ago. There are four kids in the family. When they came to Lebanon, Youssef worked at a gas station, cleaned the windows of the cars and worked for around 3 weeks, from Monday till Saturday, from 7 am till 6 pm and gave the money to his mother, he was paid between 3000-7000 Lebanese Lira a day. Stopped working when he came to school. He did not work in Syria. 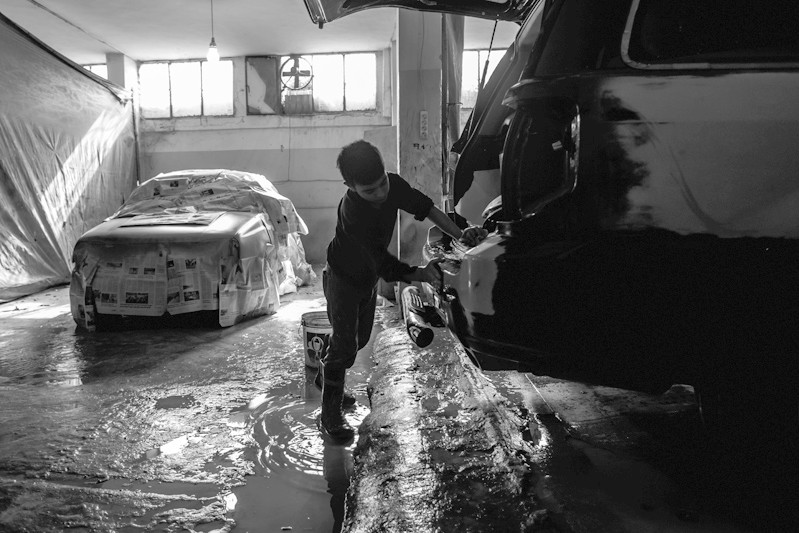 Jasem, 12, Syrian refugee from Deir El Zor in Syria, works in a mechanics shop in Beirut, Lebanon on March 22nd 2014. Jasem works from 8am till 6pm. He wants to go to school, but does not know how to. 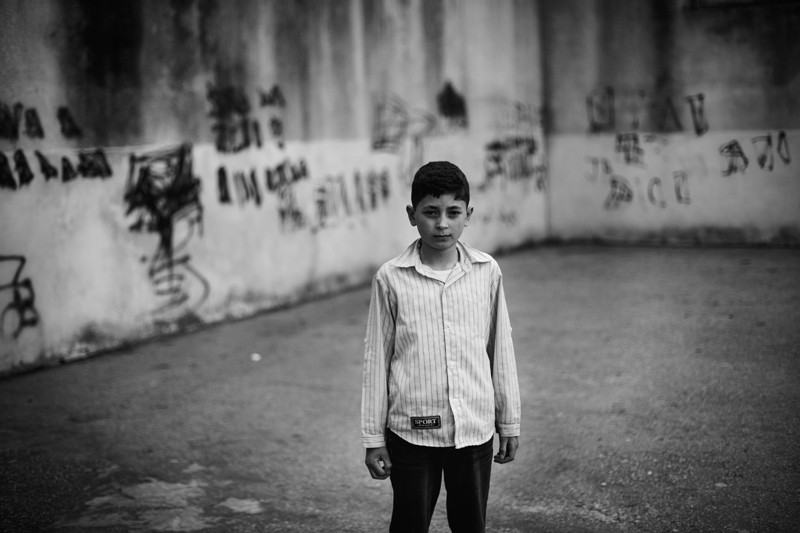 Ahmad Mohammad Ashkar, 12 years old, Syrian refugee from Homs, is seen in a school playground, his favourite place, in Broumana Mixed Intermediate Public School in Mount Lebanon region, Lebanon, on March 18th. He came to Lebanon 2 years ago and used to work as a carpenter. "I wanted to help the father with the income, we live with my cousins because my uncle is dead, so my father helps them." Ahmads father found the work for him, because he works in the same shop. "The work was hard, I worked a lot ,from 6 am till 4pm, but than stopped when I was sent to school." 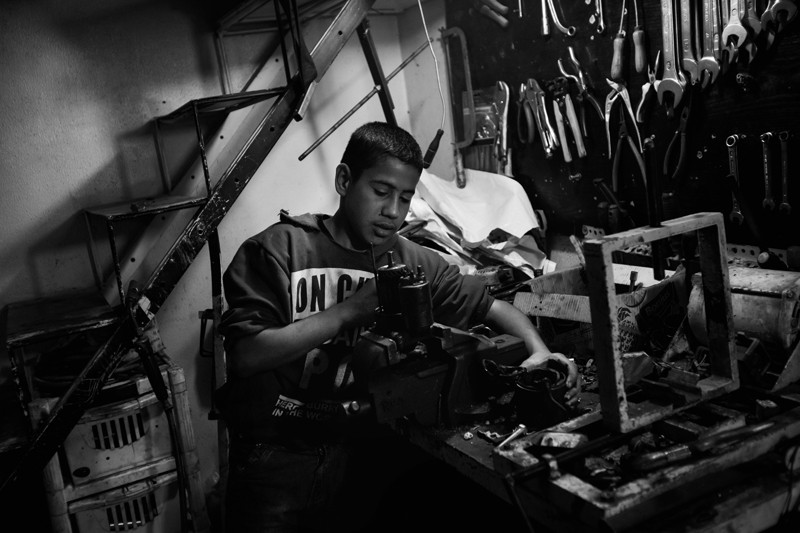 Mazen, 14, Syrian refugee from Homs, works in a mechanic shop in Tabarja, Jounieh in Lebanon, on March 22nd 2014. He's been in Lebanon from the beginning of the war. He liked school in Syria, but refuses to go to school in Lebanon, so he decided to work in a mechanics shop. He helps the family with the income. 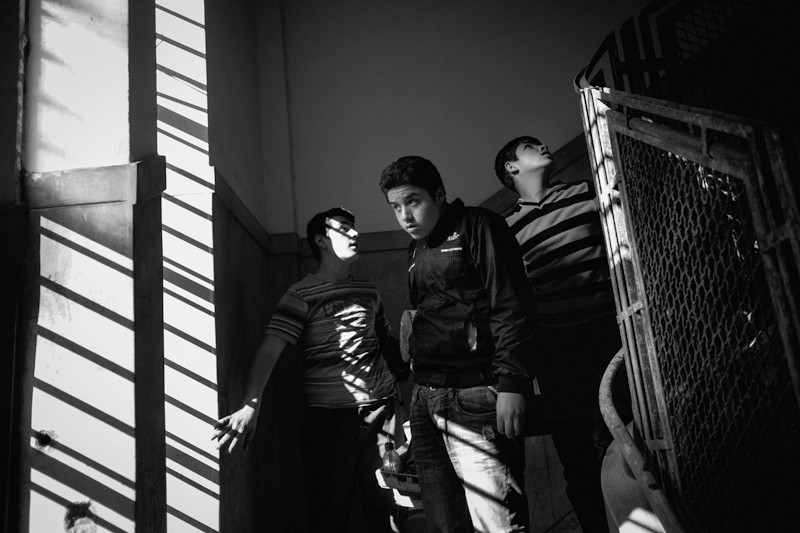 Ahmad, 16, Faissal, 15, and their friend hide from police in Hamra region of Beirut, Lebanon, on March 15th 2014. If they get caught, police confiscates their shoe shinning kit, which is worth around 10 USD. Ahmad's parents are both sick, so he has to provide for the family. To be able to work in Hamra, the boys are forced to pay money to a "mobster". 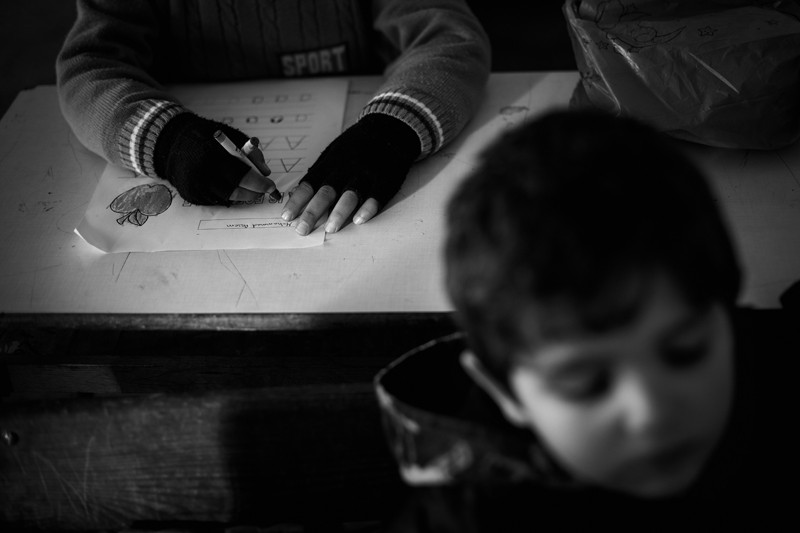 A classroom of Syrian refugees, in Mount Lebanon, Lebanon, on March 19, 2014. 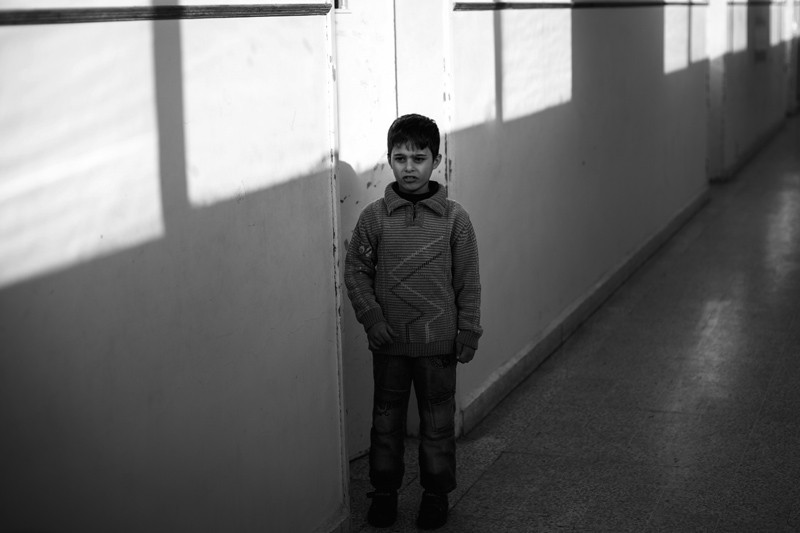 Bashir, 9, Syrian refugee, is seen in a hallway of his school in Aley in Mount Lebanon region in Lebanon, on March 19 2014. He came to Lebanon with his family 1,5 years ago. When his family moved to Lebanon, he started to work at the agricultural field. He worked from 8am till 7pm, where he earned around 3 USD per day. He gave all of his earnings to his mother. He now goes to school and only works in the morning till 2pm. He did not had to work back in Syria. 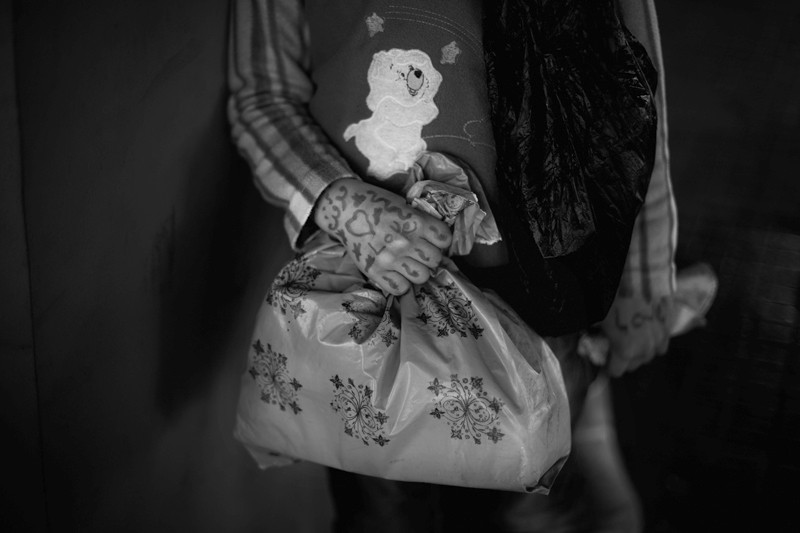 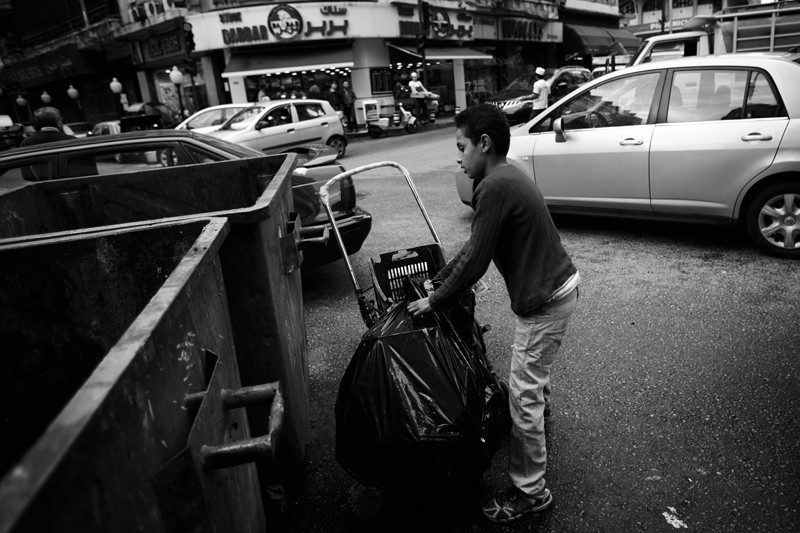 Abed, a Syrian refugee, collects metallic pieces from the dumpster in Hamra region of Beirut, Lebanon, on March 13, 2014. 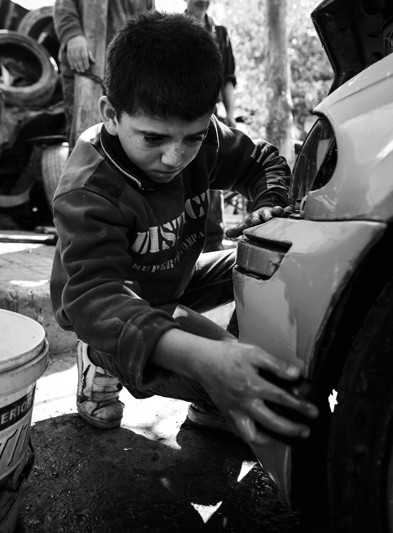 Ziad, 12, Syrian refugee from village near Aleppo, polishes the car in mechanic shop in Bourj Hammond area in Beirut (Lebanon) on March 22, 2014. Started working one week ago. Ziad wants to go to school, but doesn't know how to. He wandered the streets, so the people in the car shop hired him. He has been in Lebanon for only 3 months. 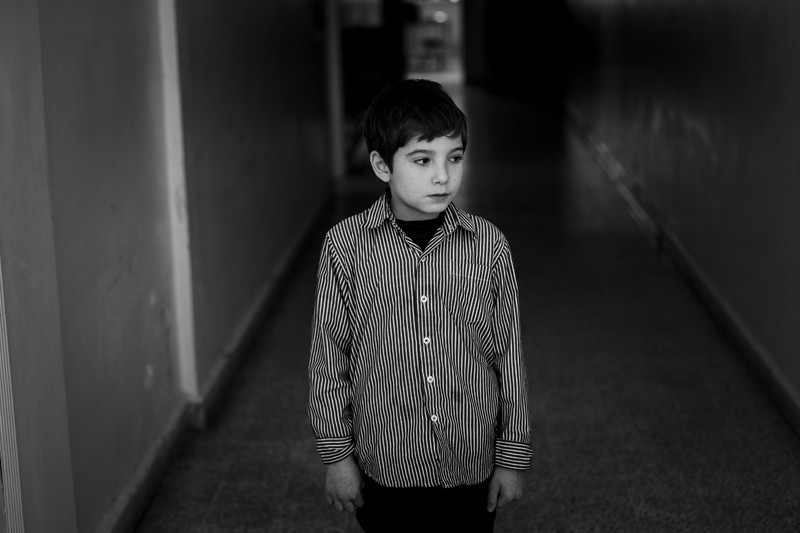 Mohammad, 10-years old, Syrian refugee from Damascus, stands in a hallway in his school in Aley in Mount Lebanon region in Lebanon, on March 19th 2014. Came to Lebanon one and a half year ago. He worked at a restaurant to deliver food. Worked also as a carpenter and in mechanic to help support his family. His dad is in jail, because he didn't have the right papers when he came to Lebanon. Mohammad now doesn't work anymore and only goes to school. 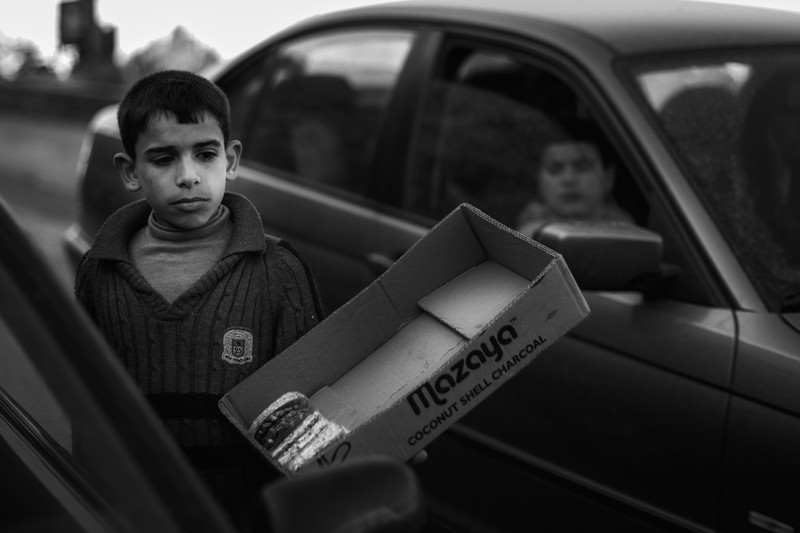 Ahmad, 12, Syrian refugee, from Aleppo, is seen selling sweets in the street in Jounieh in Lebanon, on March 22, 2014. He's the youngest child in the family. Ahmads father died in Syria, so family would not survive if he didn't work, this why he can't go to school. He is in Lebanon one month and lives in Tripoli: "No am not afraid to live in Tripoli, despite the constant fights happening. Here is peaceful, Aleppo was much worse." 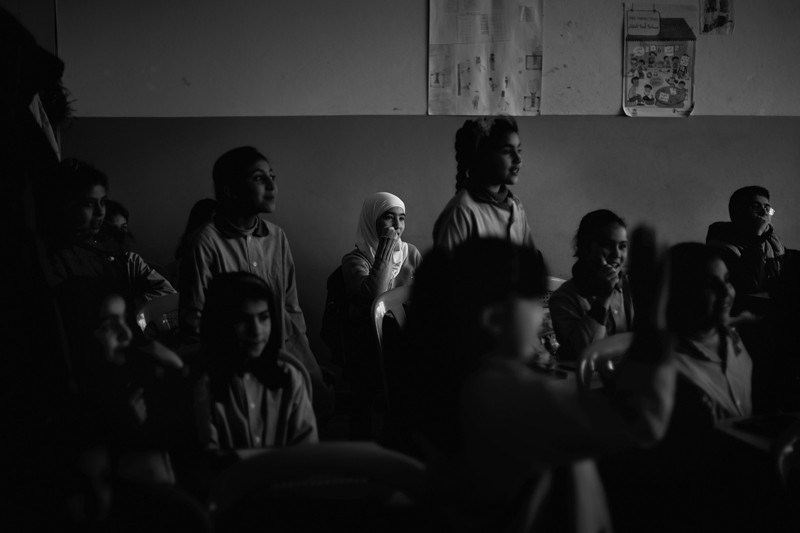 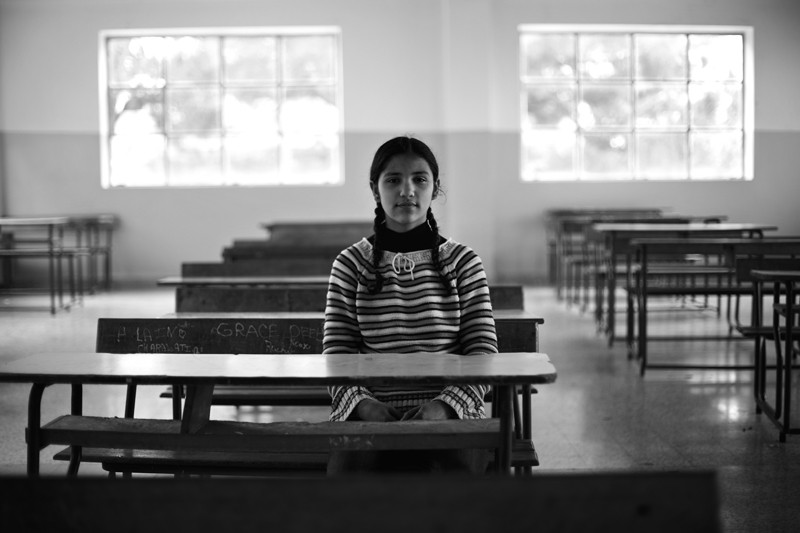 Kawtar Tillo, 13, years old, poses for a picture in empty classroom in Broumana Mixed Intermediate Public School in Mount Lebanon region, Lebanon, on March 18th. Kawtar came to Lebanon one year and three months ago and goes to school for two months now. Before she was working in a restaurant, washed the dishes etc. She worked from 7 am till 2 am and didn’t earn any money, because her boss did not pay her after 40 days. Even her father couldn’t get the boss to pay her. "The work was exhausting. Brother worked at the same place as well and didn’t get paid" says girl who before did not work in Syria, where she had "very good life". Than the family left because of the bombings, they were out of food and water. She likes school in Lebanon and wants to become a journalist. 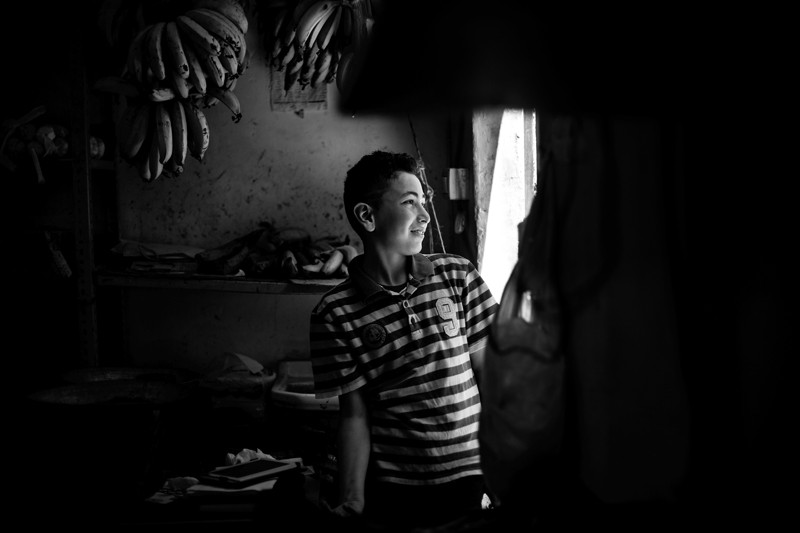 Ahmad, Syrian refugee from Idlib, 13, in a fruit and vegetables market in Dbayeh area in Lebanon, on March 22nd 2014. Ahmad goes to school in the afternoon and works in the morning. Before he came to Lebanon, a school in his area, where they lived, was being bombed during the night. He and his friends went to see the school in the morning and helped carrying the bodies from the schools. He's been in Lebanon for 8 months. 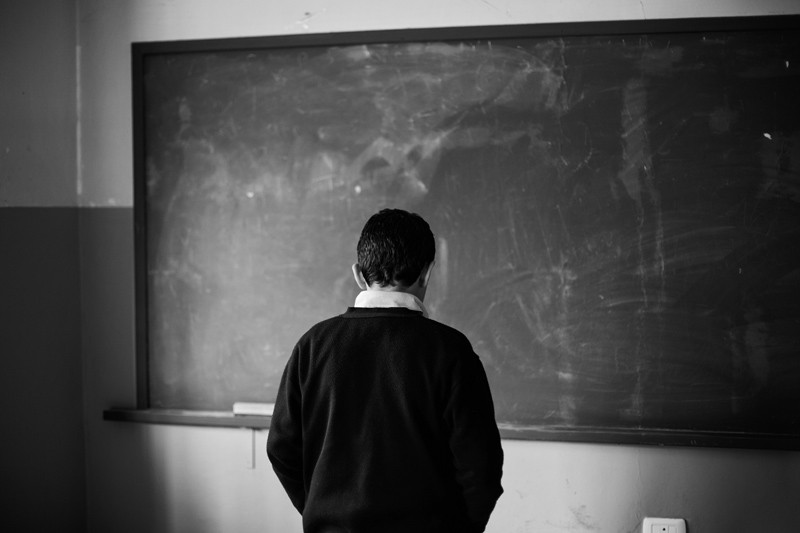 A Syrian refugee boy in a school in Chanay, Lebanon, on March 18th 2014.
Boy who wants to stay anonymous, 14, works in a barber shop. He's from Daraa, Syria and has been in Lebanon for 1,5 years. Children in a syrian-run school want to stay anonymous, because they are suppose to soon serve the army in Syria. 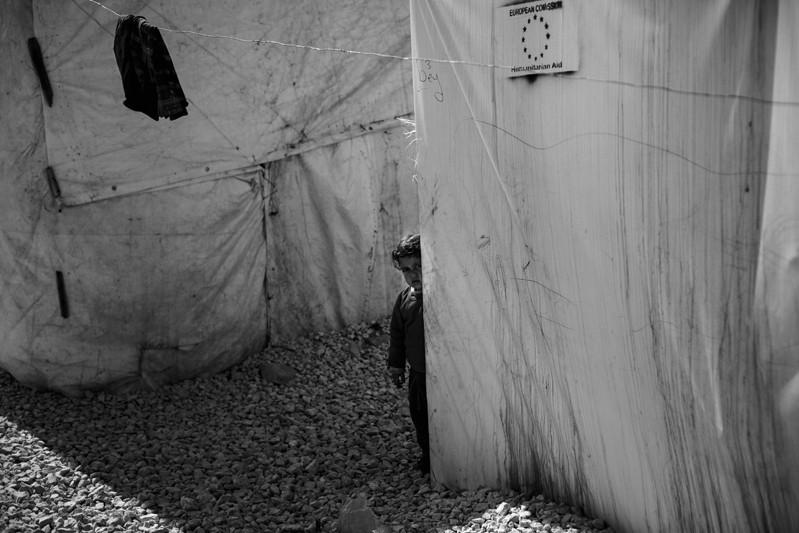 Syrian child looks on in a refugee camp in Dalhamiah, Zahle in Lebanon, on March 20th 2014. 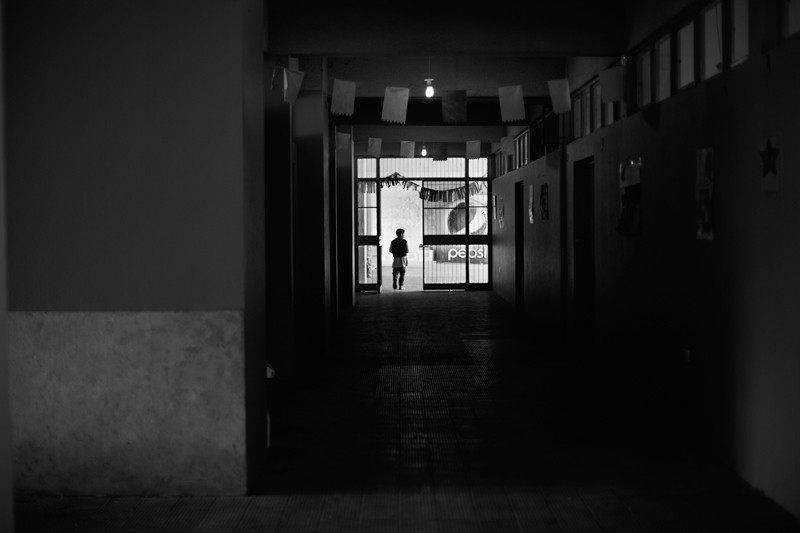